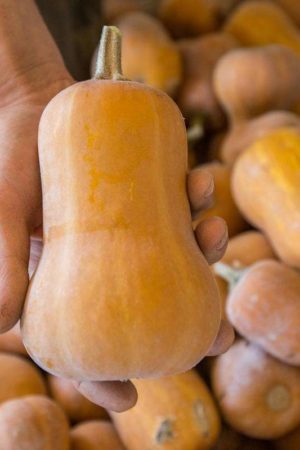 Honeynut squash is small in size, averaging 10-13 centimeters in length, and has the traditional bell shape of a butternut squash, only much smaller with a short, bulbous bottom and long neck. The thin, smooth rind matures from green to mottled orange with streaks of dark green to an all-over deep orange when fully ripe. The flesh is firm, moist, and orange with a small cavity in the bulbous end of the squash filled with stringy pulp and a few flat, cream-colored seeds. Once harvested, Honeynut squash is cured up to three weeks in a temperature-controlled setting, which allows for the sugars to condense within the flesh and the skin to harden. When cooked, Honeynut squash is tender and creamy with a sweet, nutty, caramel, and malt-like flavor.

Honeynut squash is a new hybrid variety of Cucurbita moschata, developed by Cornell University, and a member of the Cucurbitaceae family along with pumpkins and gourds. A cross between a butternut and a buttercup squash, Honeynut squash took nearly thirty years to perfect through many years of partnership between universities and seed companies, and it had to overcome the perception that bigger isn’t always better. After the squash’s release, it was introduced in the G9 Chef’s Summit where nine of the top chef’s in the world meet to discuss food-related issues. The new squash variety then became well-known for its rich flavor packed in a small size and was listed at #39 on the Saveur 100 in 2015, which is a survey used along with recipe trials to distinguish exceptional food and produce from the well-known food, wine, and travel magazine. Honeynut squash can be used in a variety of culinary applications and is favored for its small, individual serving size and rich flavor.

Honeynut squash was created from butternut and buttercup squash, two cultivars that have been shown to contain vitamin A, a nutrient to help maintain normal organ functioning, and vitamin C, an antioxidant that strengthens the immune system. The squashes also provide lower amounts of potassium, fiber, iron, and calcium.

Honeynut squash is best suited for cooked applications such as roasting, baking, boiling, and sautéing, and is a bit easier to prepare than butternut squash due to the smaller size. The recommended preparation for the sweet squash is roasting, which allows the sugars in the flesh to caramelize, and this maximizes the flavor profile of the squash. Honeynut squash can be used in any recipe calling for butternut or other winter squash varieties and can be added to soups, stews, or braising liquids. It can also be roasted and pureed, mashed, or cooled and combined with nuts, cheeses and bitter lettuces for salads or side dishes. Honeynut squash pairs well with radicchio, kale, miso, green apples, pine nuts, farro, quinoa, garlic, onion, chives, thyme, sage, nutmeg, cinnamon, Parmigiano Reggiano, mushrooms, corn, black beans, maple syrup, and honey. It will keep up to a month when stored in a cool and dry place, and any peeled or prepared portions can be refrigerated for up to a week. Raw, cut Honeynut squash can be frozen up to three months.