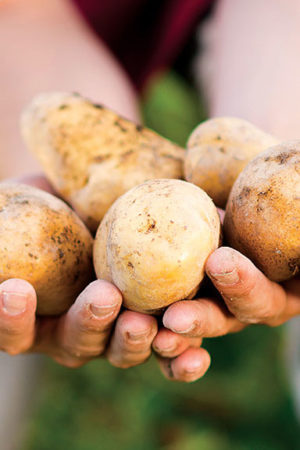 Kennebec potatoes, botanically classified as Solanum tuberosum ‘Kennebec,’ are one of the most commonly grown white potato varieties in the United States. While they can be used for an assortment of culinary applications, they are most widely distributed to processors to be made into potato chips and French fries. Today there are a number of different chipping potatoes sold under the Kennebec name such as Chipetas, Atlantics, and Pikes.

Kennebec potatoes are best suited for cooked applications such as baking, mashing, or roasting, but their best virtues are displayed through frying. They can be used to make any number of fried potato preparations such as steak fries, hash browns, shoestring potatoes, French fries, potato skins, chips, and Hasselback potatoes. Kennebec potatoes also maintain their shape when cooked, perfect for potato salads, curries, soups, and stews. Companion ingredients include bacon, creamy and sharp cheeses, garlic, caramelized onions, savory herbs such as thyme, parsley, and sage, spices such as paprika and dill, and the zest and juice of a lemon. Kennebec potatoes will keep up to a month when stored in a cool and dry location away from direct sunlight.  Sold by the pound.

There are no reviews yet.

Be the first to review “Organic Superior Potatoes” Cancel reply