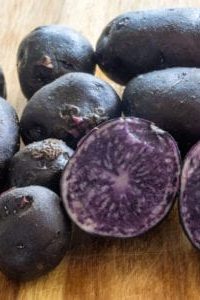 Magic Molly potatoes, botanically classified as Solanum tuberosum, are a highly pigmented, late-season, American variety belonging to the Solanaceae or nightshade family. The saturated, dark purple tubers were discovered growing as a natural mutation in Alaska in the early 21st century and quickly became a favored home garden variety. Magic Molly potatoes were named after the variety’s founder, Bill Campbell’s daughter, and the purple tuber was considered one of Campbell’s greatest achievements in his spud-filled career. Potato enthusiasts favor Magic Molly potatoes for their thin skin, creamy texture, earthy flavor, and dark-purple hue, retaining their vibrant coloring even when cooked. The tubers are also labeled as an all-purpose cultivar that produces good yields and stores well. Despite their small size, Magic Molly potatoes are not categorized as a true fingerling, as the variety can be kept small or grown to larger sizes, and the potatoes are used in a wide variety of culinary applications.

Magic Molly potatoes are a versatile tuber best suited for cooked applications, including roasting, baking, sautéing, and boiling. The pigmented potatoes are known for retaining their vibrant purple hues through cooking, especially when roasted and provide a colorful addition to savory dishes. Magic Molly potatoes can be boiled and sliced into salads, mashed as a creamy side dish, or diced and sauteed into a breakfast hash. The potatoes can also be thinly sliced and baked into chips, wedged and roasted as fries, quartered and tossed into soups, stews, and curries, or sliced in half and baked, developing a crisp skin and soft flesh. Beyond savory applications, the tubers are sometimes incorporated into cheesecakes with added sweeteners. Magic Molly potatoes pair well with herbs such as cilantro, parsley, thyme, and rosemary, aromatics such as garlic, onions, shallots, and green onions, Dijon mustard, olives, artichokes, and meats, including poultry, beef, pork, turkey, and fish. Magic Molly potatoes will keep 1 to 2 weeks when stored in a cool, dry, and dark location.

Magic Molly potatoes are an excellent source of anthocyanins, pigments found in the flesh containing antioxidant-like properties, and are high in copper, a mineral that helps to strengthen bones and maintain optimal metabolism. The tubers are also a good source of vitamin C to boost the immune system, vitamin B6 to regulate the nervous system, and contain lower amounts of potassium, iron, and fiber.

There are no reviews yet.